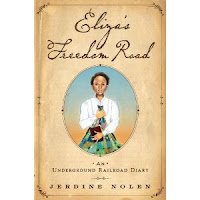 When the novel opens, Eliza is just eleven years old, working on a farm in Alexandria, Virginia.  Her mother has been sold, which was devastating to her, but she has friends at the farm who help to take care of her.  At first she works as a helper to the cook; later she ends up acting as a personal maid to the Mistress of the farm, in the role that her mother used to fill.  Eliza is overjoyed when her close friend and mentor, Abbey, gives her a diary:

“Talk your words in this,” she told me.  That’s when Abbey gave me Mistress’s never-been-used writing diary.  Mistress had thrown it out.  She cannot see so well to write anymore.  I am writing in it now.  Abbey gave me two lead pencils, too.
“Write your words in it.  But do not ever let Sir see you do it,” she warned me.  I know what she means.  It is unlawful for Slaves to read and write.   Mistress does not but Sir enforces the Slave Laws to the letter.  Sometimes I am so full of fear for writing in my little book.  But I must write.  It helps me to think and remember.

Eliza is unusual among the slaves because Mistress taught her to read and write at a young age, so her diary entries that make up the novel are well written in standard English.
When Mistress becomes ill, Eliza accompanies her on a journey to Maryland to stay with her sister.  Although Eliza is heartbroken to leave Abbey, going to Maryland removes her temporarily from the Master’s brutal rule, and his intention to sell Eliza, as he sold her mother, at the next Slave Auction.  As Mistress’s condition worsens, it becomes clear that Eliza will have to run away in order to avoid this fate, as well as the Master’s violence.
Interspersed among the tale of Eliza’s escape using the Underground Railroad are retellings of the stories that Eliza’s mother told her as a child.  These range from Bible stories to African folk tales to familiar stories of Brer Rabbit.
I enjoyed this little novel and learned a lot from it.  It is definitely targeted toward younger kids; there are references to violence but nothing explicit.  I think it would be ideal – and enjoyable – for older elementary or middle school students studying the Civil War, with its details both of slaves’ daily life and of how the Underground Railroad worked.
139 pages, A Paula Wiseman Book (Simon & Schuster)

Sue I think this books sounds fascinating. I would be interested as reading this as well.

Hope you join the Monday What Are You Reading this week as well - this is a special anniversary addition that I am very excited about! :)