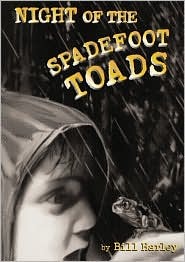 Our family loves Bill Harley, author, storyteller, and entertainer-extraordinaire.  His CDs and DVD feature a mixture of silly songs and outrageous stories that we can listen to again and again (and still laugh like crazy!).  He wrote a holiday picture book, Dear Santa: the Letters of James B. Dobbins, that quickly became a favorite in our household (even now that the boys are teens) for its warmth and wit.  So, I was eager to read his latest middle-grade novel, Night of the Spadefoot Toads.  I expected silly humor but instead found a serious, engaging novel with an environmental bent that I enjoyed very much.

Ten-year old Ben is not happy.  His family just moved thousands of miles from his beloved desert in Arizona to cold, wet Massachusetts.  He left behind his best friend, his pet lizard, and the desert landscape he loves.  Ben feels like he doesn’t fit into this new place.  He has no real friends yet and misses the reptiles that lived near his home.  Then, he makes an unlikely friend – his new science teacher, Mrs. Tibbets (who his fellow students estimate is at least a hundred years old!).  She asks Ben to help her with some yard work and, while at her house, shows him some of the unfamiliar flora and fauna in the woods behind her house.

Before long, Ben is as excited as Mrs. Tibbets about the expected appearance of the spadefoot toads, a species that emerges from underground just one night a year (sometimes not at all) after a hard, soaking rain in early spring.  Just as things seem to be looking up for Ben, he learns that Mrs. Tibbets is being forced to sell her house and land to developers, thereby further endangering the rare toads that live there.  In his desire to help the toads, Ben begins to neglect his schoolwork, his family, and even some budding friendships.  He needs to figure out a creative way to save the toads without damaging his own life.

I found myself pulled into this intriguing novel right from the start.  The characters are well-drawn and realistic.  Although it does not feature Harley’s renowned silliness, it is clear that he remembers what it is like to be a kid, just as his funny stories from his own childhood told in his live shows and CDs, illustrate.  The facts about the toads in the novel are all true, and the book won the Green Earth Book Award.  This is a sure winner for middle-grade readers who like to read about kids like themselves or have an interest in animals and the environment.

NOTE:  If you'd also like to check out Harley's fabulous sense of humor, I highly recommend Yes to Running! in either CD or DVD form (see link below).