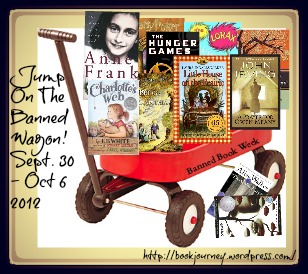 Sheila over at Book Journey is hosting a celebration of banned books, with lots of links to other blogs and giveaways, so stop by!  And join in the fun yourself by reading banned books and/or posting about them.

I just finished Brave New World by Aldous Huxley and am now reading The Chocolate War by Robert Cormier, both commonly banned books.  Look for reviews of those later this week, here and at Book By Book.

From these two lists, I have read the following kids/teen/YA books (see Book By Book's Banned Book post for the list of grown-up books read).  I linked to my reviews where they are available:
Wow, I have been a bad, bad girl!!

I was pleased to see that many of the banned books I have read (on this list and the one at Book By Book) were assigned for school (mine or my kids'), so kudos to our schools for giving us a broad and unrestricted education!

Check out the lists to see how many banned books you have read...and select one you missed and head to your library!
Posted by Sue Jackson at 9:05 AM

Isn't it great Sue to look at those lists and see how "bad" we are? LOL Thanks you so much for posting about banned books!

Great list, apparently I'm a naughty girl too! ;) I haven't thought of Deenie in forever..what a great book!

I read the Chocolate War and its sequel some time ago and didn't realise it was banned. Yeah, there's another book I can add to the list of books I'm obviously not supposed to be reading.

I really want to read Brave New World so I'm looking forward to your review. :)

another great book that I'm sure you read to your kids....Brown Bear, Brown Bear.

Seems the author's name was the red flag this time. The book was pulled without ever checking it. Not sure of the rest of the story.

It seems that Judy Blume has quite a few books on the banned books list! I loved reading her books when I was younger... I must dig them about again one day :) And whoever would have thought a Roald Dahl book would have been banned?!