Teen/YA Review: In the After 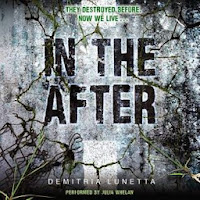 Continuing the creepy fun in Dangerous Reads Month, I listened to the teen/YA audio book In the After by Demitria Lunetta. This suspenseful story combines both post-apocalyptic and dystopian elements into a fast-paced novel full of surprises.

Amy is fourteen when They come and change the world. Gruesome green-skinned monsters, They have a taste for human flesh and quickly take over the world. TV news coverage shows Them arriving in a ship, before all forms of media disappear. Amy is fortunate to live in a high –security house that helps keep Them away and her safe, but her parents – who were out when the attack began – are missing. The creatures seem to have a poor sense of sight and smell but excellent hearing, and Amy quickly learns to live a very silent existence, especially on those dangerous occasions when she must leave the house for supplies. On one of those excursions, Amy discovers a scared and battered toddler, all alone in a deserted grocery store, so she takes her home and calls her Baby.

Amy and Baby live together for several years in the safe house, using their own form of sign language to communicate and rarely seeing other human beings. They become very close, and their life together falls into a routine, though danger is still lurking just outside the fence.

Then one day, they are saved! A community called New Hope finds them and takes them into the safety of their compound where many others are living safely and peaceably together.  Finally, Amy can relax, and they can both get used to not being alone anymore. It takes a period of adjustment, but they both make new friends, start school, and settle into life in New Hope. But certain things just don’t seem right to Amy, and the more she learns about New Hope, the more concerned she becomes.  Besides Them outside the compound, she now worries about new dangers possibly lurking right inside their new home and how to keep herself and Baby safe.

Throughout the story – through both the post-apocalyptic beginning and the dystopian second half – the suspense and tension are maintained.  I listened to the book in record time. Like another post-apocalyptic novel I recently finished, AMatter of Days, this one also contains some unlikely coincidences – Amy’s father was an environmentalist who installed solar panels so they could live “off the grid” and her mother had a super-secret government job that required an electric security fence around their house – that ensured the main character’s survival in the frightening post-apocalyptic world. As with that book, I just accepted those contrivances as necessary to the story and went along for the ride – and it was a wild ride! It sounds like there might be a sequel coming…ah, yes, I see on the author’s blog that In the End will be released June 24, 2014. I can’t wait!

If you want to listen to a sample of the audio, click on the amazon link below - there is a "Listen" button just below the photo of the cover.