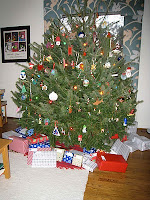 We had a very nice Christmas here in the Jackson household yesterday, with LOTS of books exchanged as gifts.  There's nothing better than new books for Christmas!  Here's a run-down of the new books that Jamie (16) and Craig (12) got:

Jamie got the next two books in two of his favorite series, plus a cartoon book just for fun:
Craig also got a cartoon book, plus the only two books in the world he would probably even consider reading voluntarily (I was so excited to find they'd both been recently released in hardcover):
Craig also enjoys annual world record-type books, so he also got:
If you're interested in the grown-up books that my husband and I received, check out my other blog, Book By Book.

Hope you had a very merry Christmas at your house and are enjoying your new books!
Posted by Sue Jackson at 12:40 PM