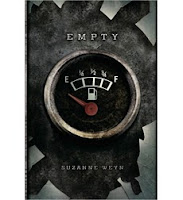 Suzanne Weyn’s new teen/YA novel Empty paints a bleak picture of our society just ten years from now, when the world’s fossil fuels are finally running out.  Her suspenseful novel focuses on several teens in the small town of Sage Valley when a war breaks out over the last oil reserves and a double-hurricane hits the eastern United States.
These two catastrophes bring the growing crisis to a head, stranding people with no electricity, heat, or transportation.  Gwen, a Goth loner, is used to fending for herself; her mother left her and her older brother several years ago.  Tom, her next-door neighbor, is a football player struggling to adjust to his father’s recent death when the crisis hits.  He has a crush on Niki, a cheerleader at school whose family’s wealth has insulated her from the growing shortages leading up to these events.
Here, Tom is thinking about how things got so bad so quickly, as he’s considering converting his dad’s old truck to a hybrid:

It happened quicker than anybody thought it could – country by country, well by well, the oil had started to dry up.  It was right in front of everybody’s faces, but they pretended it wasn’t happening.  They still tried to drive everywhere.  They still cranked up their heat in winter and air-conditioning in summer.  Reserves were depleted.  Alaska was drilled.  The price went higher and higher.  And while rich people – really rich people – could still afford to get places, the crunch got tighter and tighter on everyone else.  Tom didn’t like to think about it – because there wasn’t much he could do about it.  Except, he guessed, fixing up the truck.

As this passage indicates, the book is a mix of factual information about the crisis and what led to it and the intertwining personal stories of the main teen characters, as they struggle to adapt to the nightmare of what’s going on around them.  There are even “news stories” appearing in between chapters, describing what’s happening in the wider world with the war and the natural disasters.
Some readers might find all that extra information distracting from the story and perhaps even a bit preachy at times, as this is clearly a cautionary tale of what could happen if our society’s rampant, blind consumption continues.  This didn’t bother me at all; I was pulled into the fast-paced story of the kids and found the explanatory information additive.  Besides, I fully believe something like this could happen and thought the book was frightening in its realism.  Also, Empty is just a plain good adventure story.
183 pages, Scholastic
Posted by Sue Jackson at 4:36 PM

Great review. I will look into this book for my library. Also...please don't tell your son that there will be a 4th Eragon book this year. I have no idea when it will be published or if Paolini is even half finished. I was just wishing out loud!

Wow that sounds like a great, very interesting book.