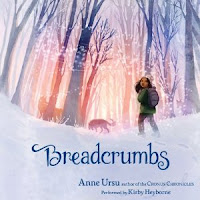 When I heard that Anne Ursu had a new middle-grade novel coming out last year, I knew it would be something special.  I’m a fan of Ursu’s, having enjoyed one of her grown-up novels, The Disapparation of James, and her middle-grade trilogy, The Cronus Chronicles, which cleverly combines fantasy and wit.  I recently listened to her latest, Breadcrumbs, on audio, and this magical story did not disappoint.

Ten-year old Hazel has had a rough time lately – her father left her and her mother, they don’t have a lot of money, and Hazel doesn’t feel that she fits in with the other kids at school.  All of that is OK, though, because Hazel has her best friend, Jack, who lives next door.  Together, they create fantasy worlds, go sledding, and play superhero baseball, so it doesn’t matter if the other kids don’t want to hang out with her at recess.  Suddenly, though, Jack seems to have changed and Hazel feels him pulling away from her.  When Jack disappears, she puts her hurt feelings aside and goes after him because she knows she is his only hope.

When Hazel heads into the Minnesota woods alone, with her backpack filled with necessities (including an autographed baseball Jack gave her), she has no idea that she is literally stepping into another world.  In her quest to find Jack, Hazel encounters all kinds of strange characters, many of whom will be familiar to fans of Hans Christian Anderson’s fairy tales.  In a classic struggle of good versus evil, Hazel uses her wits and her connection with Jack to seek out the Snow Queen and bring Jack back home.  It’s a sometimes scary journey for Hazel, but somehow you always believe that things will turn out well in the end.

The genius of this novel is the way that Ursu weaves a realistic story of 10-year old best friends struggling with the kinds of challenges that real kids face together with a fantasy world populated by fairy tale characters.  The blending of fantasy and reality (which was also evident in The Cronus Chronicles) is sure to appeal to middle-grade readers.  Add to that Ursu’s considerable talent for prose, peppered with references to popular children’s literature, and even a dose of her trademark humor, and you have a magical, engaging story.

Although I enjoyed the audio production of this book, I think this is a case where the traditional paper book is best, thanks to Erin McGuire’s beautiful illustrations.  I bought a copy of the hardcover for my 9-year old niece for Christmas, and she paged through the book reverently, pausing to exclaim over each illustration and running her hands over the beautiful cover.  She even gently removed the jacket and gasped in delight at the embossed snowflakes on the book itself (a girl after my own heart!).  It’s a beautifully produced book that makes a lovely gift for any young reader.

For more information about Anne Ursu and her books (including some of the illustrations from Breadcrumbs), check out her website.