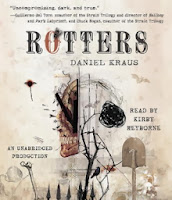 Ever since I was about halfway through the audio book of Rotters by Daniel Kraus, I have been thinking about how I would review it because it is such a complex and contradictory novel. It is a wholly unique story – a coming-of-age tale wrapped up with grave robbing – that is dark and disturbing yet compelling.

Sixteen-year old Joey lives a fairly normal life in Chicago with his single mother: he plays the trumpet in the school band, works hard to be a good student, and has one good friend who helps him contend with the typical trials of high school. Joey’s life falls apart, however, when his mother is killed in an accident, and he is sent to rural Iowa to live with a father he didn’t even know he had. Ken, his father, isn’t any happier to see Joey than Joey is to be there.

Quickly, Joey’s ordinary life turns into something from a nightmare. He has lost his mother, and his only remaining family member clearly doesn’t want him there. He moved away from his only friend (who quickly moves on with his life) and has no friends at his new school, where he is bullied relentlessly, not only by fellow students but also by a sadistic teacher. To make matters worse, Joey discovers that his mysterious father makes his living robbing graves. Although the people in town don’t know the exact nature of his occupation, they all sense that it is something underhanded and illegal, and they ostracize Ken…and now Joey, too.

Things just keep getting worse for Joey, until it seems like you just can’t bear to hear (or read) about one more horrible thing. He is bullied, neglected, starved, and ridiculed. Just when you think it can’t get any worse, it does. Meanwhile, Joey very gradually learns more about his father’s life as a Digger, as they are known, and the history and details of grave robbing.

If all of this sounds depressing and macabre, well…it is. Rotters is a very dark and disturbing novel that only gets worse (and worse).  The ending does offer some hope, but it is a long road to get there. It took me 2 months to finish listening to Rotters on audio, in part because it is a long novel and in part because I couldn’t listen to it for long periods – I needed breaks from the sad, angry atmosphere of the book. As I said at the beginning of this review, it is compelling – I was certainly rooting for Joey and wanted to see how things turned out for him. I also felt, though, that it was a bit too long; that may have been partly due to my disjointed way of listening to it. Rotters won the 2012 ALA’s Odyssey Award for Excellence in Audiobook Production, and I agree that it was very well done – perhaps that is part of why it is so disturbing, because the characters felt real. Just be forewarned that it is a long and sinister journey.