I recently came across a couple of reviews of wonderful series for middle-grade readers that I originally wrote for Family Fun magazine but that never made it into print.  As you'll see by the references to now-16 year old Jamie, I wrote these quite a few years ago, but both book series are still wildly popular and excellent choices for middle-grade readers.  Bats and cats...

If your kids have already plowed through every Redwall book at the library and bought every Guardians of Ga’Hoole book at the school book fair, here are two series sure to satisfy their ardor for animal adventures. 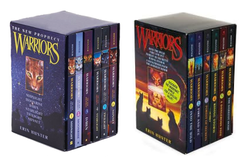 The Warriors series by Erin Hunter follows the exploits of four Clans of wild cats and one housecat’s quest to join them.  My 11-year old son, Jamie, has devoured each book in the 6-book series as soon as it was released.  I intended to read just the first book for this review, but the engaging plot kept me hooked until I had finished the whole series while my grown-up books sat unread on my nightstand.  Despite the fierce title, the Clans live by a strict honor code and fight only when necessary to defend themselves.  Erin Hunter has created a fascinating feline world filled with details of the cats’ daily lives, relationships, traditions, and spiritual beliefs and populated by compelling characters who face an array of challenges. Jamie and I have both begun the new trilogy, Warriors:  The New Prophecy, which focuses on the next generation of Clan cats.  Ages 8 – 12.  HarperCollins, $15.95 hardcover, $5.99 paperback.
NOTE:  Since I wrote this review, two additional Warriors series have been released: Power of Three and Omen of the Stars, and Erin Hunter has begun a new series about polar bears called Seekers.

In Silverwing: How One Small Bat Became a Noble Hero by Kenneth Oppel, readers view the world from the perspective of bats instead of cats.  The young undersized protagonist, Shade, gets separated from his colony during their annual migration and meets all kinds of characters – both friendly and frightening – on his journey to find his family.  This soaring tale of adventure and growing up is sure to appeal to tweens, who can read more about the Silverwing bat colony and Shade’s exploits in the sequels, Sunwing and Firewing.  Jamie flew through this series during a sick week home from school and almost forgot the television was even in the room.  Ages 8 – 12.  Aladdin Paperbacks, $5.99 paperback; $15.95 boxed set.

Have you read either of these excellent series?  They still stand as two of Jamie's favorites!

I have not read either of these series, but a lot of my middle school students have over the years. Great reviews though.