Teen/YA Review: The Boy in the Striped Pajamas 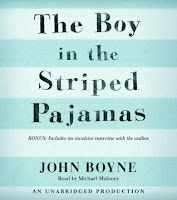 I normally only post a review on one of my book blogs, depending on whether it is for adults or for kids/teens/YA, but I am making an exception for The Boy in the Striped Pajamas by John Boyne because it is an engrossing, moving story perfect for both adults and teens/YA. I listened to this unique historical novel on audio and thought it was a teen book all along; I was surprised to get to the end and listen to a note from the author where he explained that the publisher had decided to market it to adults. Whether they’ve intended it for teens and YAs or not, it has become very popular with that age group, ranking as #6 in Historical Fiction for Teens on amazon.com.

It seems like every other book is set in World War II, but this one takes on a wholly unique perspective of the Holocaust: that of a young German boy whose father is in a high-level position within the Nazi party. Bruno is only nine years old, and author Boyne captures his point of view perfectly. He’s not a Nazi child during World War II; he is simply a child like any child in any other time and place in history. Bruno goes to school, enjoys playing with his friends, can’t understand why his older sister is acting differently lately, loves his parents, and is unaware of the larger world of politics and war.

When Bruno comes home from school one day to find that his family is moving from their big house in Berlin, he is upset, as any child would be, to leave his friends and his beloved home for someplace unknown. Their new home is far away, with no other houses near by, and Bruno complains about it to his mother, who tells him he must not complain because this move is important for his father’s career. There is a huge fence bordering Bruno’s new house, and through it, he can see hundreds of men, women, and children, all dressed alike in striped pajamas. Desperate for some company, Bruno sets off on a hike along the fence where he finally meets another boy, Schmuel. Though they are separated by the fence, the two nine-year old boys discover they have a lot in common and become friends.

The child’s voice in this novel is completely authentic and pulls you right into his world. He truly has no idea what is going on in the larger world. He thinks that the new place where they live is called Out-With and that his father’s important boss is nicknamed the Fury. Bruno’s innocence and naivety allow us a different kind of perspective on this horrific part of history. The audio production was excellent, with the narrator’s slight German accent  and childlike tone making Bruno’s perspective believable.

Boyne so perfectly captures Bruno’s simple little-boy world that at first, I actually thought this was a book for middle-grade readers. But there are some heart-rending developments in the story that would be distressing to younger readers, and in light of Bruno’s complete ignorance, it is necessary for the reader to have some basic understanding of what was happening in that part of the world in 1942 in order to fully grasp the events of the novel. It is a compelling, powerful, and haunting story that will stay with you long after you close the book or turn off your iPod.